On the inside, there is a Statue of Liberty mural on the wall, along with numerous Lady Liberty’s throughout the location. As fans of the series know, the Kettlemans are not running a legitimate tax preparation business, but instead, are fraudulently stealing customer refunds . . . .

The complaint included images from the show and images of actual Liberty Tax locations (such as the examples below) in support of its allegations that the fictional business could be confused as a depiction of the real one. 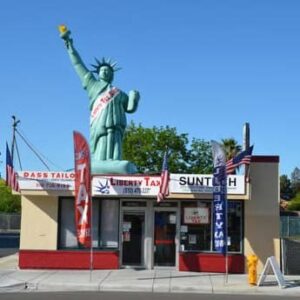 The case has been assigned to Judge Gardephe.